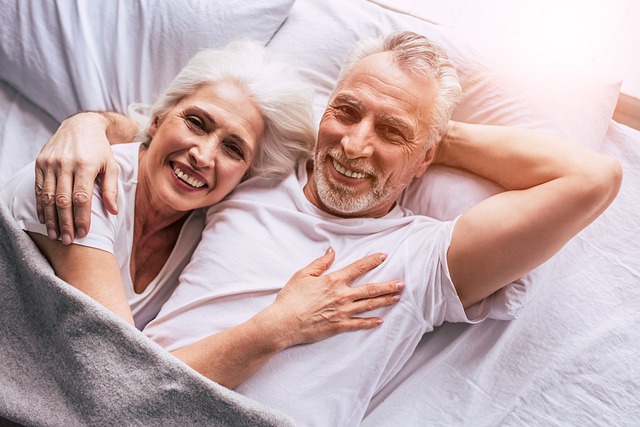 Sleeping Together And Actually Getting Rest

Just because you and your partner share a bed doesn’t mean either of you gets any rest. Ideally, this is the case. Once both of you have found your rhythm, it will get easier. Some married couples struggle with this for years.

There are situations where such couples go in and out of effective matrimonial restfulness. Doing nothing won’t fix the issue. Some things are beyond resolution, but for most, there are at least a few things you can do. With this in mind, here we’ll explore tips to help you both sleep.

Resolve Any Emotional Issues Impacting You

Maybe you wronged your spouse or they wronged you. Whatever the case, if either of you has a chip on your shoulder or other emotional issues, that’s going to make it difficult to sleep.

Before you go to bed, you need to hash it out. Some issues can’t be resolved before nighttime. Most can. Regardless, you should always strive to be at peace with one another before bed.

There are times when one or the other of you will end up on a couch in the living room. However, if you’re conscientious about this and open enough to discuss issues, that can help. Keep in mind, doing this may mean one or both of you have to make a compromise. Sometimes an issue has a deep root that won’t be resolved in a day.

Fine then. Address the issue. If it won’t be resolved in a day, it definitely won’t be resolved by ignoring it over the long-term. The faster you reach a resolution on a given issue, the better you’ll both sleep.

Get On The Same Sleep Schedule If Possible

Here is also something not always possible for couples. Maybe one of you is a nurse and the other works swing-shift at the quarry. Plenty of couples are in that situation. However, if you can find a way to get on the same sleep schedule, that will make it easier for both of you to rest when you sleep together.

Have Some Good Ole’ Fashioned Sex

Sex knocks men out and makes women feel very good—though they’re not quite as “spent” as the man after the act. Still, both of you have a fine warm glow afterward. Provided you’re not going for some “Sting”-level marathon, sex can help you sleep. Here’s a link that provides an overview of mattresses which may be best for sex between you and your spouse. Butter, peas, and almonds with some fine seasoning are delicious. But they are going to produce some gaseous consequences within about three hours, and until the body is done digesting.

Any foods that make you gassy should be eaten before two or three in the afternoon. That way associated gaseous digestion doesn’t manifest in the night and wake you up. If you’re serving dinner, keep peas for lunch; the same goes for beans. That will stop such percussive bodily consequences from impacting rest.

Both Of You Should Get On A Sustainable Exercise Regimen

Eating right is one thing, working out is another. Exercising in proper amounts equally between both of you will give you energy in the day, and necessitate increased recuperation for your body, allowing you to sleep more restfully and fall into that sleep more quickly. Getting The Sleep You And Your Spouse Need

Exercise, diet, intimacy, aligning sleep schedules, and resolving emotional issues are all fine tactics to help you and your wife or husband get true rest when you both go to bed at night. Some things aren’t going to be easy to fix, but if you’re intentional about this, you can reduce restlessness at night, and get some real sleep.

CBD Oil For Dogs: Is It Worth The Try?

Playing Online Games to Improve Your Mood and Relieve Stress

What is Drinking Hot Water? – Best 17 Health Benefits, and More