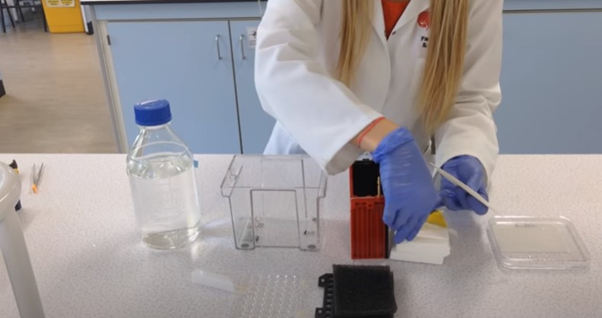 Antibodies: How They Differ in ELISA & Western Blot

We understand that antibodies are a great tool in diagnostic immunology. Many screening tests like ELISA and Western Blot are also antibody-based tests. But if both these test uses the immunoprotein created by our body then, what makes them unique? How do western blotting and ELISA antibodies differ?

The answer is antibodies themselves. When we compare western blotting vs ELISA, we see both these screening tests use antibodies but they have a completely different approach toward them. In western blotting, we use antibodies (a chemical that our body generates in response to the illness) to detect antigens (proteins found on the surface of the virus) of the disease. On the other hand, in ELISA viral antigen is used to detect the antibodies created by our body due to infection.

The other crucial difference is western blot is an immune-assay as it depends upon antibodies to detect antigens. But ELISA can use a non-antibody antigen-binding probe. Hence, ELISA may or may not use antibodies.

These are major differences between the two techniques. In addition to these, the method to perform both tests are also completely different. An enzyme-bound antibody or antigen facilitates the assay. The test result is a combination of specificity of antibodies and sensitivity of enzymes.

It confirms the infection by detecting the antigens or antibodies created in response to some antigens.

What is Western Blotting? A blot refers to the membrane on which biological molecules such as proteins and nucleic acids are static. Proteins are immobilized on the gel and then transferred to the membrane.  After protein transfer antigens are detected by antibody probing.

Blotting can detect DNA, RNA, or proteins. But the western blotting is specifically involved proteins. It is also called immunoblotting due to its use in medicine.

Why ELISA is followed by Western blotting for HIV screening?

HIV cannot be diagnosed from the symptoms as it has common symptoms such as headache, nausea, and back pain. Also, other STDs can produce the same effect as HIV antigen. Hence, it is common to get a false report. Thus, it is necessary to confirm it with another test.

ELISA results were confirmed by performing western blotting. However, from 2014 the trend has been changed. But it is still used and reliable enough.

Immunoblotting is a multi-step procedure. The steps include protein gel electrophoresis, protein transfer, blotting, antibody probing, and detection. Let’s understand each of these steps in detail.

The next step is to transfer these proteins from the gel to a suitable membrane. The most commonly is used membranes are nitrocellulose and polyvinylidene. These both have a high affinity for proteins and binding capacity.

This transfer is necessary because for further detection the membranes are thinner as compared to gel film. This makes the binding sites of protein more accessible to the antibodies.

In the electrophoresis transfer, the current excludes the proteins from the gel.  And then transfer them to the membrane. As we know that proteins are negatively-charged, they move towards the membrane.

When the proteins start moving toward the membrane they get arrange in order of higher molecular weight to the lighter protein.

At the end of the protein transfer step, all the proteins from the gel move to the membrane and become tightly attached to it. So, we have a membrane with a copy of the band pattern from the gel. The third step is known as membrane blocking or blotting.

It blocks the empty spaces but does not affect the protein bands. The most commonly used blocking agent is.

The final step is detection. For this, the membrane with the primary antibody is washed by a mixture of secondary antibodies.

We may detect the desired proteins directly. But secondary antibodies increase the sensitivity of the test and hence, provide accurate results.

Western blotting and ELISA are antibody-based diagnostic techniques. But ELISA may use any other antigen-binding protein than antibodies. Thus, it is not dependent on antibodies.

If you are still thinking, how do western blotting and ELISA antibodies differ? They do not consider any different antibodies, but the technique used is different in approach.

Everything you Need to Know about CBD Wholesale Edibles

What is a Canker Sores? – The Best 10 Remedies and More

5 Common Dental Emergencies And How to Prevent Them

What Happens At Anxiety Treatment Centers?